Write a short txt for two artworks, for the intro of an indiegame. 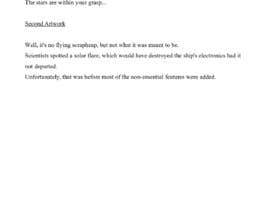 Update: there has been quite some entries and many are a bit too "artsy" and "fantastical". The texts could be done quite informative and to the point. A bit finesse is good, but the info to set the scene needs to be there. The ship you are about to captain, is travelling to a set planet in a set solar system.

I will rate and comment entries so you know if you are on the right track. Thanks for all interest in the project!

This job consists of two short pieces of writing for the intro of an indiegame. If the demo of the game gets positive feedback, I might consider getting a lot more writing done for the game.

After the title screen and menu of the game when a new game is started, the player is shown two artworks, with a short text on each. I envision two or three lines of text on each. Perhaps 15-30 words pr artwork? I`m pretty flexible here, as long as I like the style of writing.

Btw: the images attached to this project is not the artworks that the text will be used for. They are not made yet. These images are for inspiration and examples of the style of the game.

The artworks and writing on them, will explain the situtation of the game for the player, and quickly get them up to speed. Two short pieces of lore, and the player is ready to start.

The game is not very hard scifi, more fun before realism, so not to dark, but not silly either..

The game is called &quot;The Generation Ship&quot;. Generation ships are ships that can travel for thousands of years, where generations of people live and die, until they reach their destination. You as the Captain and advisors however, live trough the whole journey (forever).

I have provided some artwork to show the style of the game. For more info, check out the games twitter account here: [login to view URL]

“Understood what was wanted, and did several iterations on the final work. Would work with again.”