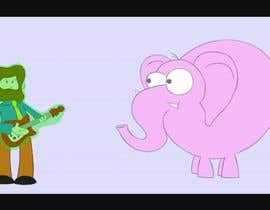 Hi, everybody. I'm co-producing an indie kids' TV show this fall/winter, and I'm looking for some brief interludes to include between various skits and music videos and such.

These would normally be in the range of 5-10 seconds, though shorter or longer segments could work, too, depending on the idea. It must use the character of Eric Herman (see attached images) as the subject, but what he does in your interlude is up to your creativity and imagination. It could be a simple pratfall, or waterskiing behind a shark, or playing guitar in a funny way, or whatever. If you really need ideas, I can give you some, but part of what I'm looking for here is someone who has a creative sense of animation and some good ideas, so I'd rather you come up with something with your own style and sense of creativity. If it's funny or clever or cute in some way, that's probably what I'm looking for. It just needs to work as a self-contained 5-10 second (or so) piece that can be transitioned into something else.

By the way, you do not need to try to replicate the look in the attached pictures... Make your own version of Eric Herman, as long as he has the same basic characteristics (blue shirt, yellow tie, khaki pants, beard, etc.). Also, when I say this is a kids' show, this is NOT something "cutesy" with rainbows and fluffy animals... It's definitely a little more edgy and comedy oriented, meant for elementary aged kids (5-10), and not for babies or toddlers. Think Monty Python but for 8 year-olds. I would recommend looking up "Eric Herman" on YouTube for examples of the visual and humor style that I typically use, especially with videos like "Ants in Your Pants #99," "Steve the Superhero," and "Blackbeard, Bluebeard and Redbeard."

I'm awarding one winner, but beyond that I may look to hire that person (or someone else who submitted) to do a series of these kind of interludes for the show. And even if you aren't the winner, I might offer to buy the use of what you create here if I like an idea(s), or hire you for some other animated or graphical segments of the show. I'm definitely looking to create relationships with talented people to draw on.

Any questions, please ask. Have fun!

“Very creative and original ideas. I will definitely hire for more projects.”